Phaser appeared as a normal GRY Scout, with no physical differences.

Phaser, at heart, was a pacifist. He was generally friendly towards people and other freaks alike. Sometimes he would use his phasing power to pull pranks on people, but it was all in good fun. He preferred to avoid combat if possible, and to end it nonviolently if it did come up. However, if he was forced into a battle situation, he woudn't hesitate to fight. As a warrior, he was determined and calm, though he would taunt enemies like most Scouts tend to do.

Phaser's main ability was that he could phase through objects and enemy attacks. This allowed him to avoid taking damage from even the most brutal of attacks, and was also helpful for getting though doors and other obstacles. He could also phase anything that he's holding through things as well - this could've included items or other people. 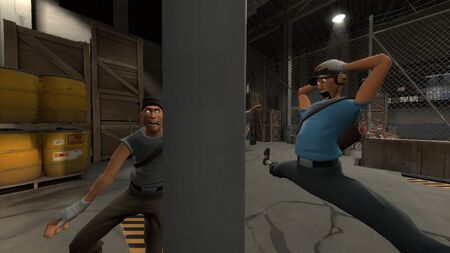 Phaser was well-armed, wielding a Shortstop for long-range attacking and a sword for melee combat.

Phaser could not attack while intangible, and could not phase through any objects that were part of the map.

Being a Scout, he wasn't very durable.

Phaser's friendly attitude could also have been dangerous for him, since he couldn't tell whether or not a person or freak is truly hostile until they attacked, usually catching him off-guard.

Phaser accompanied NinjaScout to Terra Pax to stop Nuclear Scout's attack on the recently-established freak vacation home. Nuclear Scout was then taken to Dr. Noooo, and it was discovered that Nuclear Scout had been under control by a microchip. Intelligent Heavy was then brought to examine it, and afterwards Terra Pax was attacked again by Creepy Medic, Cakehead and Fabulous Spy. Phaser took out the latter with help from Spy and Spy.

Cakehead revealed that his superior had set up in 2Fort, and Phaser went with the attacking team to confront the mysterious villain. Along the way, the team encountered Snyphurr, who was defeated when Phaser teamed up with Trollscout to steal the Bugler's horn and send him to Dustbowl.

After some more opposition, they found QuintaHeavy, a horrifying merging of five individuals that revealed itself to be the creator of Terra Pax, planning to use it as an internment camp for expanding his freak army. It fled, and the team followed it to Turbine. After dealing with more freaks, QuintaHeavy fought the team, and was defeated. Phaser then found a strange serum, and was then impaled by a RED Vagineer. The serum turned out to be a combination of various blood samples from various freaks, which the RED Vagineer and his superior, Necroborg Vagineer, had aimed to steal. However, the RED Vagineer used the serum on itself, turning into an ultra-powerful freak and teleporting to Terra Pax. Before he died, Phaser transferred the last of his life-force energy into the matrix, and said his goodbyes to NinjaScout.

Retrieved from "https://tf2-freakshow-concept.fandom.com/wiki/Phaser?oldid=28024"
Community content is available under CC-BY-SA unless otherwise noted.