Pavor Nocturnus is a global paramilitary organisation designed to maintain global order through martial enforcement. Though a militarised superpower on the outside, Pavor Nocturnus is massively concerned with technological advancement, and by obtaining and developing increasingly advanced technology, it will achieve its goal in perfect world order.

Pavor Nocturnus was first formed centuries before the present day, originally as a think tank to develop an advanced military program through the creation of Automatons and, eventually, cybernetic enhancement on organic lifeforms. At some point in the think tank's evolution, its successes in advancements had begun to be substantially funded, though much of the funding was spent on forming an underground economy. Not after long, Pavor Nocturnus was secretly selling and developing technology worldwide, with Overseer, the head of Pavor Nocturnus, keeping a firmly silent grasp on it.

Soon, Pavor Nocturnus grew so large, that its reserve technology that was designed under secret experimentation began to supersede the technology they were selling. Overseer's plan was to eventually utilise that technology to usher in a new world order - though at first, they had to remove the current order. Pavor Nocturnus fully mobilised its terribly advanced automaton units, and purged the earth before anyone was aware. Whilst most of civilisation remained, some of it was eradicated entirely, and Pavor Nocturnus emerged in its place. Since then, Pavor Nocturnus has had major influence over the world, in ways that many have been too terrified to stand up against.

With many millions of active personnel across the world, Pavor Nocturnus is undoubtedly the largest military organisation present. Within its own continuity, Pavor Nocturnus is dedicated to the institutionalisation (or eradication) of Freaks, however in their history, Freaks are on the verge of extinction due to Pavor Nocturnus' relentless hunting. New, self-designed Freaks have been put in place, and the most able of them have become elite operatives of the organisation.

Its proclaimed goal is to achieve a steady future for the earth - through the advancement of technology. Pavor Nocturnus' technology frightfully supersedes technology found in the common TF2 Freak World by seemingly centuries or millennia, and, in one way or another, Pavor Nocturnus has procured alien artifacts for study. 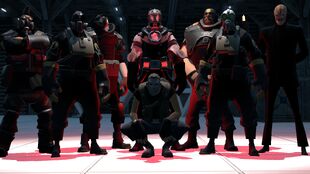 Retrieved from "https://tf2-freakshow-concept.fandom.com/wiki/Pavor_Nocturnus?oldid=23721"
Community content is available under CC-BY-SA unless otherwise noted.