Fjord (aka "Fjord of Coldfront") is a BLU Sniper TF2 Freak created by UrbanTheProfessional.

Fjord was originally a normal BLU Sniper who lived with a group of other BLU mercenaries in the Coldfront region (cp_coldfront). One day during a hunting trip, he fell into an abandoned mine shaft. After doing some exploring, the Sniper came across an ancient winter spirit imprisoned by iron chains, with runes etched into the ground.

Upon seeing the Sniper, the winter spirit pleaded for release. It said that it once ruled Coldfront, but some humans defeated and imprisoned it deep underground to steal the frozen lands as their own. Feeling sympathetic, the Sniper freed the spirit. The last thing he saw before a bright light before passing out.

Some time later, the Sniper's fellow BLU mercenaries noticed he had gone missing, only to find said Sniper looking murderous, with a pale and deathlike appearance as if he stood in a blizzard for too long. He declared that Coldfront is now "off-limits" and began killing off his friends one by one.

Those who managed to survive the massacre fled Coldfront, never to come back again. The Sniper, now calling himself "Fjord", has reclaimed Coldfront as his territory. Anyone who enters the region even by accident will pay with their lives.

Fjord used to be a friendly and decent fellow, but after he was possessed by a winter spirit, he became a cruel and territorial Freak with one goal: to keep trespassers out of Coldfront. If someone sets even one foot into the region, Fjord will know, and has been known to pursue his targets with intense and unwavering focus. He does not care if the trespasser(s) belong to a certain team or not, because all of them are dead to him.

Fjord's current personality actually belongs to the winter spirit possessing him. After seeing what the humans and Freaks had done to its former land, the winter spirit was driven mad with grief and rage. It now seeks revenge against those who wronged it and ruined Coldfront in an attempt to "civilize" the region. 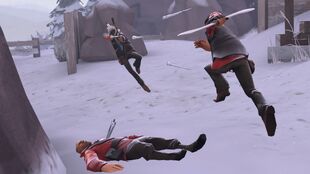 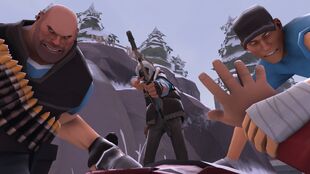 Fjord's minions assisting him.
Add a photo to this gallery

Retrieved from "https://tf2-freakshow-concept.fandom.com/wiki/Fjord_of_Cold_Front?oldid=18682"
Community content is available under CC-BY-SA unless otherwise noted.