Cenelis is a PNK Scout TF2 Freak created by CreepypastaJunior. Similar to Fadkiller and Scombine, he is paid to exterminate anyone he is told to kill.

Cenelis was once a normal BLU Scout who happened to grow up with the Thief known as Bane. They met while they were in the foster home, Cenelis the one who saw Bane murder the foster parents in cold blood. Cenelis was found 3 weeks later in the foster home, he was starving and eating dead rabbits that had passed by to stay alive. He was also sitting next to the decaying corpses of the foster parents, The Police assumed Cenelis killed the parents and Cenelis was arrested for second degree murder. However Cenelis kept telling the Police that Bane killed them but no one would believe him, Cenelis found someone that seemed to like Cenelis as a person and they figured out a plan to escape the Prison. And that they did, they escaped the Prison and headed to a random house, they killed the people in the house and claimed the home as their own. However one day, while they were chilling. Bane broke into their house and Bane shot Cenelis' partner, Cenelis rushed Bane with a knife but Bane overpowered Cenelis quickly. Bane took their valuables and ran off. A BLU Engineer came upon the house and knocked on the door, when there was no answer he entered only to see 2 corpses on the floor. The partner was dead but Cenelis was still breathing. The BLU Engineer took Cenelis to his base and started making repairs on his human body aswell as the BLU Medic healing Cenelis to keep him alive. Cenelis is now a cyborg, hitman and Freak Exterminator.

Cenelis has a enhanced Force of Nature scattergun, it has 3 different types of shell ammo. One being heavy slug round, a very powerful bullet enough to top the Desert Eagle. Another one is a fire slug round, able to set anything on fire. And last but not least he has his very special customized slug round, once it has penetrated a victim. The slug round will start to drain the victims fluids such as water, blood etc till the victim is nothing but a corpse with nothing in it. 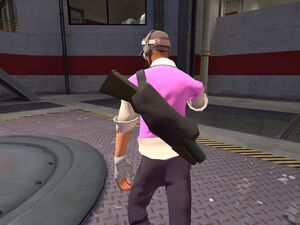 His Enhanced Force of Nature

Cenelis' slug rounds have a weakness though, if he faces stronger freaks they may be able to destroy any of his slug rounds. And his customized slug round takes time to drain the enemy's life force so the stronger freak can have enough time to kill Cenelis and take the slug round out of him.

Retrieved from "https://tf2-freakshow-concept.fandom.com/wiki/Cenelis?oldid=27129"
Community content is available under CC-BY-SA unless otherwise noted.