Aqua is a BLU Soldier TF2 Freak conceptualized by Icy guy2. He is conceived to be the morally questionable protagonist of Fiends.

Aqua was originally a mercenary, and was one of the most skilled members of his team. He eventually became bored by the repetitive fighting he was constantly a part of. He left the team with his best friend and fellow Soldier, Alex, to pursue riskier and more exciting missions. It was also around this time that the duos freakish abilities started to emerge.

While on their journey, the pair would stumble across a violent Scout with inhuman strength. Their freakish abilities were finally used, and they incapacitated the Scout before fleeing. Realizing the dangers that malevolent Freaks pose, the two decided to become vigilantes.

Naming themselves after their abilities, the duo of "Aqua" and "Claw" started their journey to depower, or at least contain, evil Freaks. After a few minor encounters with freaks, Claw would tragically be crushed by falling debris while training.

This saddened Aqua, to the point that he became obsessed with trying to eradicate all Freaks.

Aqua's first mission was killing a RED Vagineer on ctf_doublecross. Although he put up a valiant effort, the Vagineer's raw strength made him nearly kill Aqua. Aqua managed to knock the Vagineer into the sewer under them, where the Vagineer drowned. Aqua then made the BLU spawn his home and hideout.

Later on, Aqua spotted a boy while rocket jumping on upward, presumably hunting for Freaks. After explaining his background, Aqua sympathized, since they had similar origins. He then teleported both of them to ctf_doublecross, where he decided to take the boy as his protege, and trained him thoroughly for hunting Freaks, Earl had been born.

Aqua appears as a BLU Soldier wearing the Navy-Blue skin. He also appears wearing a Slo-Poke (painted An Air of Debonair BLU). When he uses his water mimicry attack, he becomes a liquid like, see-through version of himself.

Before Claw's death, Aqua was a normal individual. He seldom spoke, but he was polite and helpful. He enjoyed helping his team, despite occasionally being rather sardonic and irritated. This behavior carried onto his vigilantism, as he fought against evil Freaks, just to protect people.

After Claw's death, he has become a vengeful, and arguably delusional individual. He now sees very little distinction between genuinely benevolent Freaks (i.e. Britelight), or horrendous monsters such as the Vagineer species. He even believes that Freaks that fit the "near normal" category, are vile, needlessly combative creatures that should be exterminated like all others.

This is due to his philosophy that all Freaks are equally as bad, because their powers can cause innocents harm, either directly or indirectly. This is ironic, seeing as how he is a Freak himself. Despite his twisted ethics towards Freaks, he holds no ill will towards humanity. In fact, he is prone to helping people, unless they are malevolent.

In combat, Aqua acts very bitter and determined. Often spouting completely farcical insults at his opponent or opponents. Furthermore, he seems to gain sadistic pleasure from killing a foe, often getting a wide grin on his face after the act.

Because of an intense daily workout regimen, Aqua has peak-human levels of stamina, strength, endurance and agility. Most noticeably, he shows a remarkable amount of strength, as he is able to pull Heavies underwater with moderate ease, and tear apart completely upgraded sentry guns without any hassle. Furthermore, he combines his water mimicry with stealth tactics, making him an evavise combatant.

Aqua's arsenal consists mainly of unconventional, yet highly effective and unpredictable weapons, usually meant for close-quarters combat. He also uses some big guns. His favorites are a nail gun, a serrated combat knife, a machete, a minigun ripped off from a UH-1Y Venom attack helicopter, a custom built tear gas grenade launcher, and the Direct Hit.

Aqua's power is his water mimicry. At will, Aqua can turn his body into water. While in this form, he is temporarily impervious to damage, as anything that comes in contact with his body merely seeps through him. Furthermore, his body is extremely flexible, allowing him to perfectly hide in water coolers and rest in sinks.

By far his most useful, and horrifying attack, is his ultimate technique "Water Spirit". After turning into water, Aqua will ambush someone after stalking them, and will enter their throat and possess their body off-screen. After taking control over their body, Aqua will use them as a puppet, making them kill their allies as a way to divert attention away from himself. 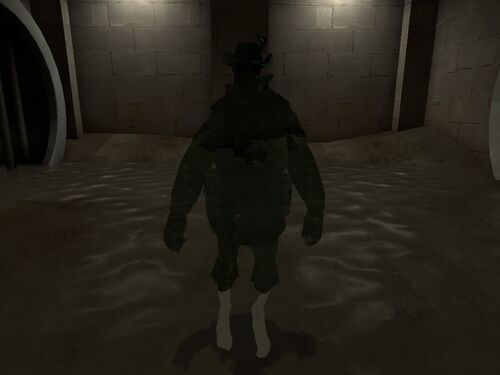 Just a day before they were going to retire from hunting Freaks, Aqua and Earl were attacked by a battalion of Vagineers on cp_doublecross. They both fought valiantly, but Earl was mutilated by one of the Vagineers, and thrown down doublecross' large ravine. Aqua believed that he was dead, but in actuality he had been resurected by and was combined with Lyktgubba's lost core, creating the lightning fast being Hermes.

With his evasive powers and resourcefulness, Aqua managed to survive the "end". Realizing that it was now pointless, he put his Freak hunting ways to rest, and took to rescuing survivors. He has gained the nickname of "Lifeguard" by many survivors and Freak World inhabitants.

He has gained a more rugged look over the years. In addition to his old hat and weapons, he has gotten a grizzly beard, lacks grenades, and wears the Coldfront Curbstombers.

Retrieved from "https://tf2-freakshow-concept.fandom.com/wiki/Aqua?oldid=20956"
Community content is available under CC-BY-SA unless otherwise noted.